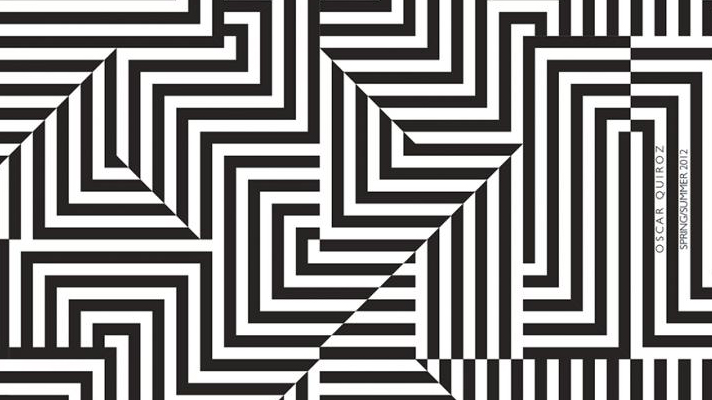 London born designer Oscar Quiroz, is ready to enter menswear, with his debut Spring / Summer 2012 capsule collection. Graduating from Central Saint Martins, Quiroz originally planned a career as a financial forecaster and economist, before moving into the world of men’s fashion.

Oscar’s previous work included stints with Ann-Sofie Back, a capsule collection with Japanese concept store Side by Side, stints with fashion / interior designer Russell Sage and BLESS in Paris, it was after a season collaborating with Dansk magazine’s fashion director Toby Grimditch that led to the creation of this debut collection.

Quiroz’s first collection is inspired from people and the studies of people and the way they interact with each other, whilst focusing on unique details on the male garments. This collection puts focus on the back of the garment and the ideas of mixing fabrics.

“This Spring I really wanted to focus on two ideas. The back of a garment and mixing fabrics. The back of a garment is often neglected in men’s clothing, from street wear through to tailoring. The details, embellishments, prints and trimmings are usually focused on the front, and I wanted to see how a simple detail, such as the slash across the garment, depending on where on the body it was placed, could give a different appearance and meaning. This was also the first time I worked on a print, and instead of working with a print designer I asked designer Andres Ros-Soto to design an elaborate pop art print to adorn the backs of t-shirts and a pretty elaborate bathroom towel,” states Oscar.

Details on the collection involve splits on the majority of the shirts along with corset boning used on the hood of a jacket, meaning the hood maintains it’s shape when worn up or down. “Boning has been used in my clothes since the first year of college, mainly as it provides excellent constructive qualities but also as it was always considered a feminine trimming I was super keen to challenge the notion that it couldn’t be used in menswear, and I placed in deliberately masculine places, like on the hood of a sweatshirt and on the shoulder”. Boning is also used in sweatshirts and tops, along with the hem of a baggy nylon parachute-thin over jacket and for the first time placed on the pocket opening, again to maintain the pocket’s shape. Other pieces include a pair of shorts, “overlined”, meaning the lining is longer than the shorts, so the wearer can adjust the hem, whilst the lining remains in tact.

Oscar Quiroz is the new name for luxury menswear and certainly one to watch for next season, with this debut collection.